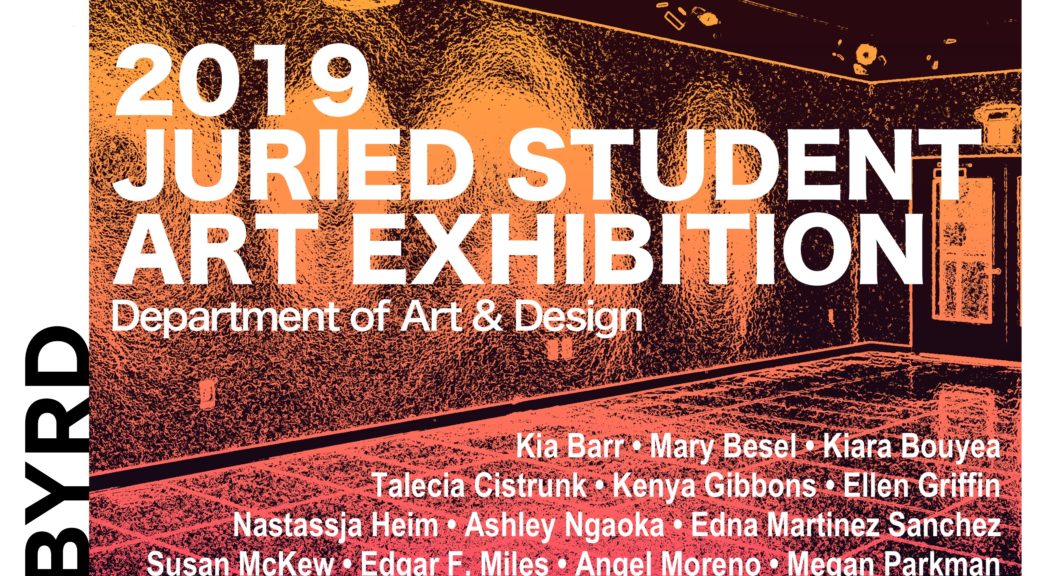 The Mary S. Byrd Gallery of Art is pleased to announce the 2019 Juried Student Art Exhibition, on view at the Gallery March 14 through May 10, 2019. The two-month exhibition opens with a reception on March 14, 2019, 5 – 7 p.m. Julio Gonzalez, a Charlotte, NC-based contemporary artist, served as this year’s juror.

Multimedia artist Julio Gonzalez is a self-taught artist and a native of Atlanta, Georgia. Since leaving Atlanta as a young teenager, Julio has traveled extensively and exhibited his work in murals, galleries, and museums across the Southeast. One of Julio’s defining characteristics as an artist is his use of Mexican and Mayan design elements to explore questions of contemporary human experiences and value.

Julio cites the simple question “what if?” as a cornerstone of his creativity and practice, a way to approach his ideas from different sides and explore them to the fullest. He hopes viewers of his work will find themselves asking the same question and rediscovering their sense of interconnectedness, curiosity, and childlike wonder. The simple phrase “what if?” is the concept behind the name Wonder What If, a project of which Julio is the Creative Director.

Between August 28, 2017 and August 10, 2018, Julio was hosted as an Artist-in-Residence by McColl Center for Art + Innovation in Charlotte, North Carolina. There he continued developing his multi-year multimedia project Dia de Los Casi Muertos, or Day of the Almost Dead, which delves into the differences of taboo and experience with death and aging between Mexican and American cultures. Julio’s time at McColl Center allowed him to explore new varieties of media, such as textiles, paper-making, and 3D printing technology.

Recently, Julio presented his work in joint 2018 exhibition Wrestling the Angel in the Bechtler Museum of Modern Art in Charlotte, North Carolina. In 2017, he participated as a panel member in the Arts & Science Council Young Donors Society and received the Art Si Emerging Artist Award. He was honored with the 2016 Arts & Science Council Regional Artist Grant. That same year, he exhibited solo work SONRIA in Haylo Healing Arts Lounge and demonstrated live painting at The Mint Museum in Charlotte. Between 2010 and 2015, Julio painted six murals in North Carolina and California. In addition, he has participated in many local Charlotte community projects.