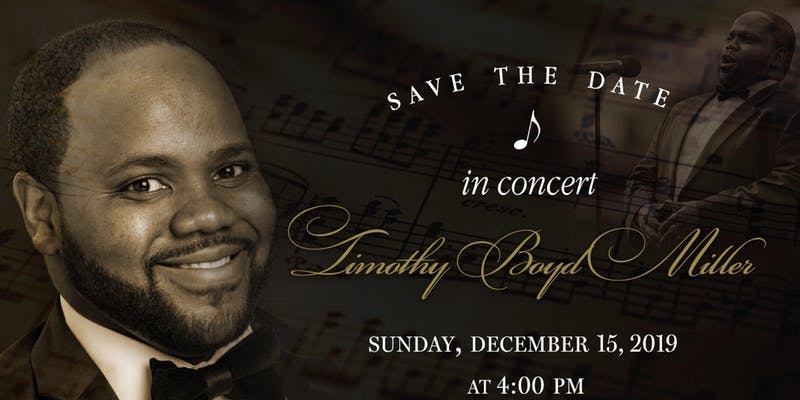 The Way Out Inc. is excited to bring Augusta native Timothy Boyd Miller back for what is sure to be a great way to help get you into the Christmas spirit. Mr. Miller will be joined by Soprano Indra Thomas and Dr. R Floyd on piano.

American tenor Timothy Miller is a native of Augusta Georgia with both national and international credits. His musical talent was developed at a young age while in the band at Tubman middle school, both band and chorus at the Academy of Richmond County, and as a member of Creative Impressions. A 2003 graduate of Morehouse college, Mr. Miller began his studies at Paine College where as a freshman he was selected to participate in the chorus for the Jessye Norman: A Holiday Homecoming concert. In December 2019 Mr. Miller will make his solo debut with the Atlanta Symphony Orchestra in the annual series of concerts titled Christmas with the ASO.

Perhaps most widely recognized for his stirring renditions of God Bless America during the seventh inning stretch of Atlanta Braves home games, Miller has extended his exposure well beyond the concert stage, including featured artist promos for Cartoon Network’s Adult Swim.

Miller’s opera credits include stages in the United States and around the world. He performed the role of Crab Man in critically acclaimed performances of Porgy and Bess at the Opéra-Comique in Paris and on tour in Luxembourg, Granada, and Normandy. Concert repertoire includes tenor soloist in Handel’s Messiah, Bach’s Magnificat, Beethoven’s Ninth Symphony and a concert version of excerpts from Richard Strauss’ Der Rosenkavalier.

Get your tickets online HERE!
Visit the Event Page HERE!