An event every week that begins at 10:00 am on Tuesday, Wednesday, Thursday, Friday and Saturday, repeating until October 27, 2019 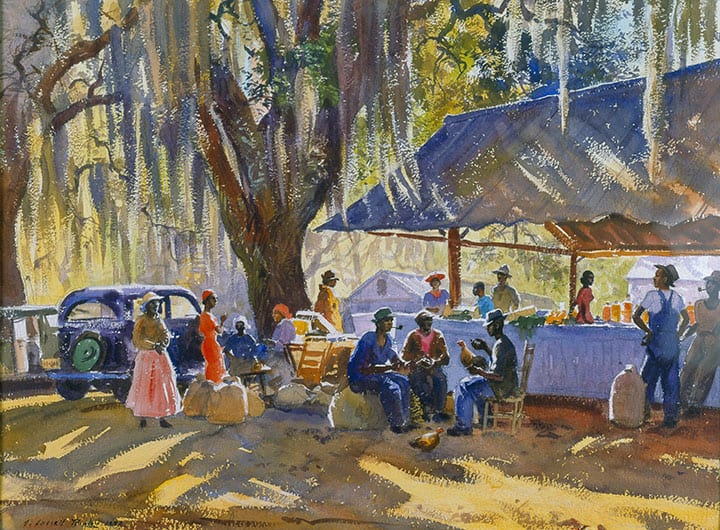 Between the world wars a striking economic and cultural renewal took place in South Carolina’s premier coastal city that was driven by creative artists—painters, printmakers, writers, musicians, and architects. The present exhibition, organized by guest curator Jay Williams, includes art from the Morris Museum’s permanent collection and special loans from the South Caroliniana Library of the University of South Carolina. The work of some of the leaders of this remarkable revival—Alfred Hutty, Alice Ravenel Huger Smith, Anna Heyward Taylor, Hobson Pittman, and Elizabeth O’Neill Verner—can only suggest the strength and spirit of the movement that is now known as the Charleston Renaissance.

Once the Queen City of the South, Charleston suffered badly during the Civil War and Reconstruction. After World War I the collapse of the farm economy, which had driven exports through its port, hastened its slide into hard times. DuBose Heyward described the place of his birth in his novel Porgy as “an ancient, beautiful city that time had forgotten before it destroyed.”

The devotion to Charleston’s beauty and rich heritage by its resident artists and many visiting artists rescued the city from economic and cultural ruin. Painters and printmakers, drawing upon the remarkable subject matter in Charleston and the surrounding countryside, helped to create an image of the place that led directly to its transformation from a faded Southern port to the premier tourist destination that it is today.

The artists of the Charleston Renaissance also helped to create the modern historic preservation movement by awakening their neighbors to the charm and significance of the city’s architectural heritage, both through their image making and, in some cases, restoring and occupying historic structures. Their efforts to save the city’s architectural history served as a model for what later became a national effort. The Preservation Society of Charleston, founded in 1920 when a landmark house was threatened; the founding of the city’s first historic house museum in 1930; and the establishment of the country’s first local historic district in 1931, all served to inspire similar efforts elsewhere.

As Elizabeth O’Neill Verner once noted, “From my earliest memories the beauty of Charleston has been a conscious blessing.”

Visit the Event Page on the Morris Museum website HERE!