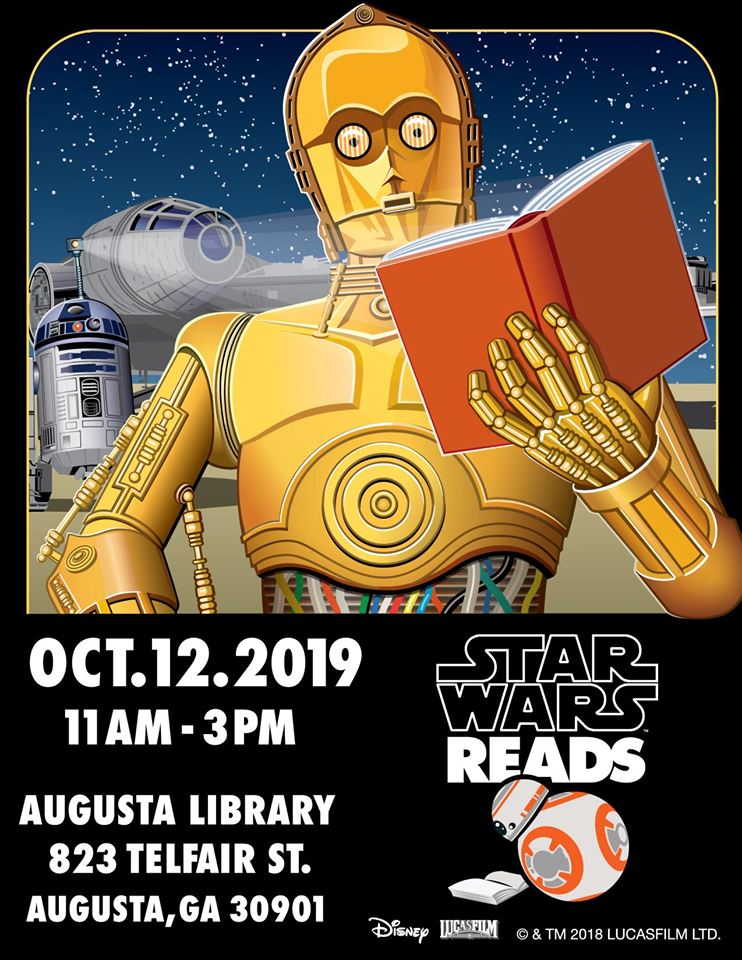 Come visit “a galaxy far, far away” at our annual Star Wars Reads Day!
This event is free and open to the public. All ages are welcome!

We look forward to seeing you on October 12! Until then—“may the Force be with you, always”!

History of Star Wars Reads
In 2012, the Augusta-Richmond County Public Library System hosted its first annual Star Wars Reads Day Literacy Event. Although 2012 was our first year, George Lucas, creator of the Star Wars franchise, launched the initiative in 2011. The goal of the initiative was to engage students on the importance of reading by using Star Wars as the spark. Today, there are hundreds of Star Wars Reads Days that take place around the country throughout the month of October.
In 2012, Dottie Demarest approached Corey Rogers about the possibility of showcasing part of his Star Wars collection as a way to get young readers and researchers interested in the Georgia Room. She created the Skywalker Family Tree to go along with the display. They discovered that instead of having to create a new event, they could use existing Star Wars Reads Day and make it a library-wide celebration.
In the first year, much of the planning was done through with the Children’s Department and other library staff, including Eileen McCoy, Kenneth Benson, and Aspasia Luster. Roughly 50 patrons attended our first Star Wars Reads Day and enjoyed four planned events: art activities, Star Wars Trivia, a Star Wars-themed costume contest and a tour of the Georgia Room and the Star Wars collectibles display.
In the six years since, the number of events has grown significantly to include Star Wars book giveaways, a live orchestra, green screen photography, reading stations, fan art, a silent auction, an exclusive literacy-themed print, and much more. One of the highlights since 2015 has been the presence of special guests with direct connections to the Star Wars Universe. In that year, the Library welcomed hometown girl Catherine “Cat” Taber who does several voices for both the Clone Wars and Star Wars Rebels cartoons but is known most for voicing Padme Amidala in the Clone Wars cartoon. The 2016 guest of honor was Julie Dolan, the voice of Princess Leia on Star Wars Rebels. 2017’s featured guest was Nalini Krishan, Jedi Knight Barriss Offee from Star Wars, Episode II: Attack of the Clones movie. 2018 featured bestselling author of the Origami Yoda series, Tom Angleberger.