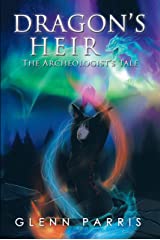 As One of the Three Keepers

Science has taught us that the dinosaurs died in a sudden mass extinction. Author Glenn Parris, in his novel Dragon’s Heir: The Archeologist’s Tale, imagines that science had it wrong—that the giant reptilians simply evacuated when the going got rough, and a veritable Noah’s Ark carried them to their new home.

For young adults and those with a love of science fiction wanting to learn more about Glenn Parris’s The dinosaurs didn’t die out; they just left premise, please register in advance for the Saturday, August 29 Sci-Fi Afrofuturism Day Camp HERE!
After registering, you will receive a confirmation email containing information about joining the day camp.

With engaging characters, an original premise and compelling themes of multiculturalism and politics, Dragon’s Heir features a cast of advanced, non-mammalian people known as the Efilu, who once lived on Earth during the age of the dinosaurs. Faced with a worldwide catastrophe of their own doing, the Efilu gathered together the populations of every intelligent species on the planet and evacuated, leaving behind a small contingency of a single species—known as The Keepers and their leader Dragon—to restore their dying world.

Some 65 million years later, an expedition of Efilus return to search for a cure to a plague in their new home. But they find a world overrun by mammals, and Dragon’s coven of Keepers is nowhere to be found.

When asked what he was trying to convey with Dragon’s Heir, Parris states that “This story represents allegory viewing Humanity in a dark mirror. How does a society treat the least of its kind when they have absolute power over them? If they need the vulnerable population, the powerful will make certain types of choice, if they DON’T need them, the choice becomes much different. In any event, the weaker social faction eventually becomes disposable. This story grabs some of our idealized political and social positions and rides them to the extreme conclusions. The relatable characters only magnify how easy it is to ignore the injustice if one can rationalize dehumanizing an exploited group.”

A board-certified rheumatologist, author Glenn Parris has practiced medicine in the Northeast Atlanta suburbs for more than 30 years. He’s been writing for nearly that long. Originally from New York City, Parris migrated south to escape the cold and snow and fell in love with Southern charm and Carla, his wife of 27 years. He now writes cross-genre books in medical mystery, science fiction, fantasy and historical fiction. The Renaissance of Aspirin, a Jack Wheaton medical mystery, was his debut novel.

To hear an excerpt from the book, click HERE!