An event every week that begins at 12:00 pm on Tuesday, Wednesday, Thursday, Friday and Saturday, repeating until September 27, 2020 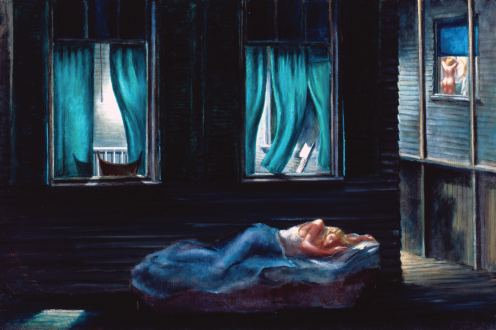 Admission is FREE this summer: Friday, June 12 through August 31, 2020 thanks to the generous support of Bank of America.

Since 1900 much of American painting and sculpture has been represented by a series of revolts against tradition, especially academic tradition.

At the dawn of the twentieth century, realism became the new direction for American artists. Later those realists gave way to modernists, many of them arriving from Europe. The impact of the 1913 Armory Show, where Americans saw Marcel Duchamp’s Nude Descending a Staircase (No. 2) for the first time, was incalculable, and soon pioneering art dealers like Alfred Stieglitz were promoting and selling the work of a younger generation of American artists influenced by cubism and abstraction.

After World War I many American artists rejected these modern trends and chose to return to various (in some cases academic) styles of realism in order to depict urban and rural America. The type of realism found in American scene painting was favored by those who depicted rural life, whereas the precisionists sought to capture architectural forms and industry in their paintings.

The South, like other parts of the country, was subject to these influences. Many of the South’s most important teaching artists spent time in New York City and Paris and brought home new painting styles. This is exemplified by this selection from the museum’s permanent collection, which features the work of Frank London, Wade White, Will Henry Stevens, Paul Ninas, Robert Gwathmey, and others.

These early works of modernism in the museum’s collection remain on view through September 27.