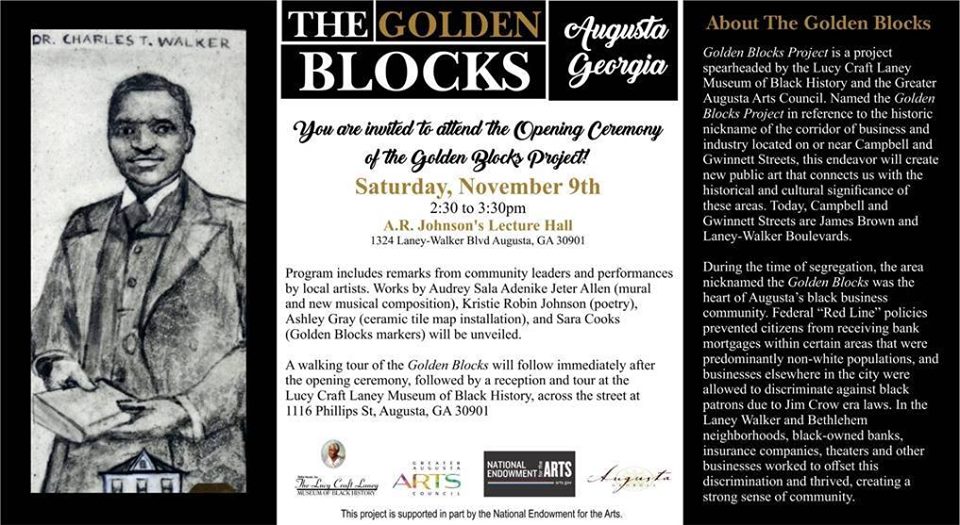 A walking tour of the Golden Blocks will follow immediately after the opening ceremony, followed by a reception and tour at the Lucy Craft Laney Museum of Black History, across the street at 1116 Phillips St, Augusta, GA 30901.

Golden Blocks Project is a project spearheaded by the Lucy Craft Laney Museum of Black History and the Greater Augusta Arts Council. Named the Golden Blocks Project, in reference to the historic nickname of the corridor of business and industry located on or near Campbell and Gwinnett Streets, this endeavor will create new public art that connects us with the historical and cultural significance of these areas. Today, Campbell and Gwinnett Streets are James Brown and Laney-Walker Boulevards.

During the time of segregation, the area nicknamed the Golden Blocks was the heart of Augusta’s black business community. Federal “Red Line” policies prevented citizens from receiving bank mortgages within certain areas that were predominantly non-white populations, and businesses elsewhere in the city were allowed to discriminate against black patrons due to Jim Crow era laws. In the Laney Walker and Bethlehem neighborhoods, black-owned banks, insurance companies, theaters and other businesses worked to offset this discrimination and thrived, creating a strong sense of community.

This project is supported in part by the National Endowment for the Arts, the Greater Augusta Arts Council, as well as funding from City of Augusta Housing & Community Development.