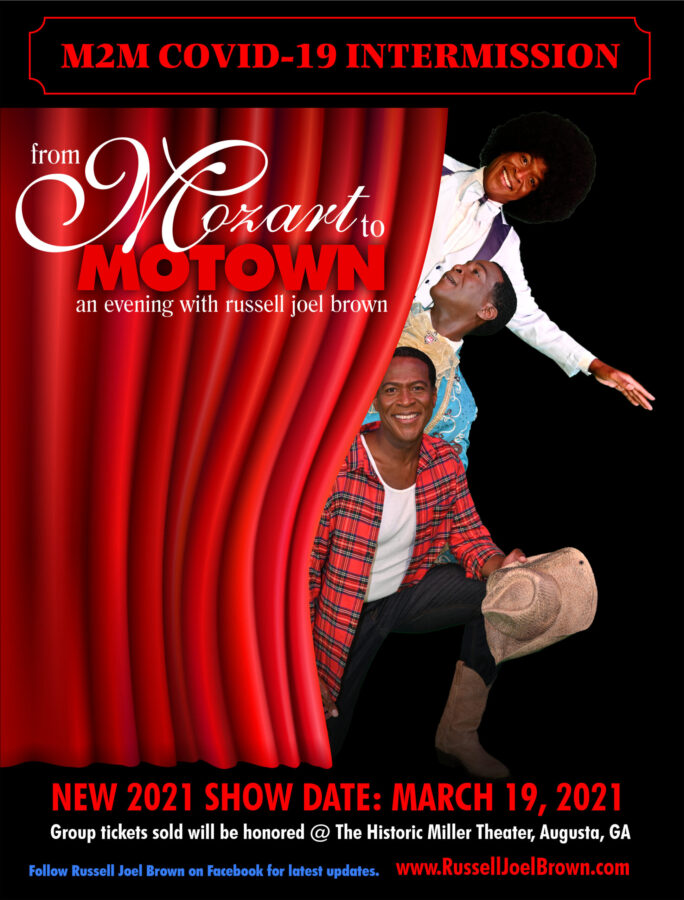 In an effort to balance the current COVID-19 uncertainty and possible health risks with the desire to produce a high-quality production, the Production and Creative team of FROM MOZART TO MOTOWN have made the decision to take a “COVID-19 intermission” and reschedule FROM MOZART TO MOTOWN to Friday, March 19, 2021. Tickets will be available at The Miller Theater on February 1, 2021. Special advanced tickets and seat locations that have already been sold will, of course, be honored.

A Holiday Gift-Giving Special with a limited number of seats will be available after Thanksgiving. Follow Russell Joel Brown on Facebook to keep up with the latest news and specials or email mozart2motown@gmail.com to be added to the email news. We look forward to coming together in March and providing an evening of amazing entertainment and memories. Stay Safe, Healthy and Happy in these unprecedented times.

Five sold-out audiences at Augusta’s historic Imperial Theater between 2002 and 2004, solidified the popularity of this show that appeals to young and old alike. Popular songs such as Phil Collins’ “In the Air Tonight”; Lynard Skynard’s “Sweet Home Alabama”; “Music of the Night” from The Phantom of the Opera; Duke Ellington’s “Take the A Train”; and the traditional spiritual, “Give Me Jesus”, are just a few of the songs that Russell Joel Brown has interpreted with his chameleon-like voice. A voice that is sometimes soothing, and oftentimes a powerful baritone. Production numbers, with sizzling choreography and beautiful costumes round out the evening and include a Motown retrospective of “My Girl”; “My Guy”; “Ain’t Too Proud to Beg”; and more!

An Augusta native, Russell Joel Brown is a veteran actor, singer, and dancer of the Broadway stage. He appeared on Broadway and international tours of Disney’s “The Lion King”, “Smokey Joe’s Café”, “The Scarlet Pimpernel”, “Big River” and “Ain’t Misbehavin’.”  Also to his credit, he sang for the funerals of such luminaries as Thurgood Marshall, Arthur Ashe, Cab Calloway, and Dizzy Gillespie. He holds a Bachelor of Arts degree from Morehouse College.

Mr. Brown impacts the lives of children and adults alike by supporting August area non-profits in raising much-needed funds. The Jessye Norman School of the Arts, Lucy Craft Laney Museum of Black History, Colton Ballet Company, and many others have benefited from Mr. Brown’s fundraising concerts and appearances. His one-man show, From Mozart to Motown sold out the 850-seat Imperial Theater 5 times, guest appearances at St. Paul’s Episcopal Church’s “Star-Spangled 4th of July” and “Tuesday’s Music Live” concerts garnered standing room only audiences, and his tour de force performance as Coalhouse Walker, Jr. in “Ragtime” was the talk of the 2019 theatrical season.

Reflective of his passion for pouring into the lives of young people, Russell Joel Brown developed and currently serves as Director of Boys With A Future, a world-class after school program for inner-city boys in academic and life crisis in the Harrisburg area of Augusta. This program seeks to revolutionize this underserved area through education, the only sure way out of poverty and into a fulfilling and well-rounded life.