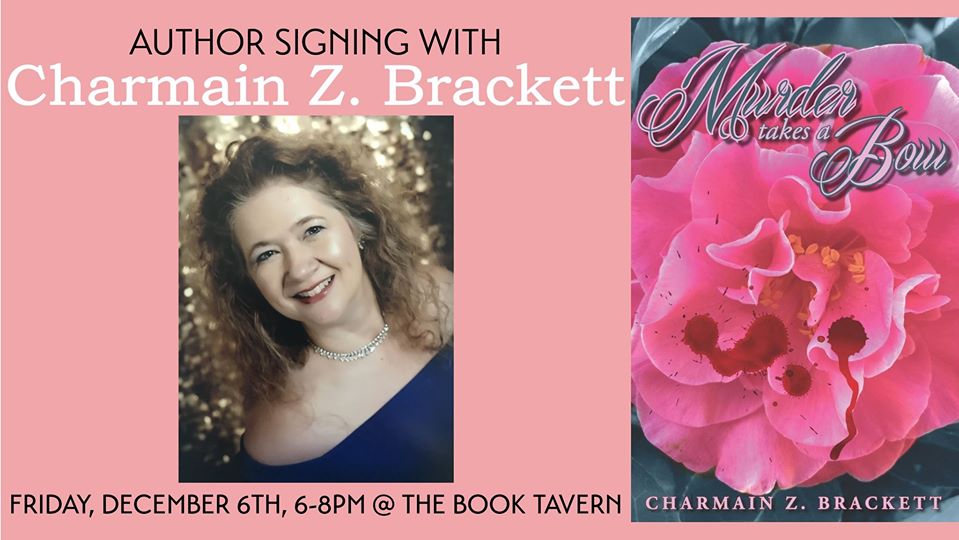 Local author extraordinaire Charmain Zimmerman Brackett will be at The Book Tavern for a signing on Friday, December 6th, from 6 to 8 PM. She will be promoting the latest novel in her Grace’s Augusta Mysteries series, Murder Takes a Bow. Come meet Charmain, buy a signed copy of her book, and then go see her brother, Leonard Porkchop Zimmerman, for FIELD Art Friday Holiday Edition at Field Botanicals from 6 to 9.

Charmain Zimmerman Brackett grew up in a picturesque Southern neighborhood filled with front porches and retirees. Her closest companions in her childhood and teenage years were the characters she found in the pages of books. In college, her love of literature, language and writing led her to pursue a degree in English. She has spent the past 30 years writing for several newspapers and magazines in the Augusta area. In 2008, a story in a series she wrote on returning wounded warriors received second place at the Department of the Army level in the Keith L. Ware journalism competition, and in 2018, the Greater Augusta Arts Council named her media person of the year.

She has written three young adult novels: The Key of Elyon, Elyon’s Cipher and Elyon’s Light. Her debut novel, The Key of Elyon, received the 2014 Yerby Award for Fiction. Her fourth novel, Fixed In The Tempest, is inspirational contemporary fiction. Her Grace’s Augusta Mystery Series features her hometown. There are four books in that series beginning with Murder Under the Magnolias. Under the name of C.Z. Brackett, she writes the Victoria James mystery series. Her first children’s book, Little Pearl’s Circus World, won the Georgia Writers Association’s 2015 Georgia Author of the Year Award in the children’s category. It’s based on the true story of her great-grandmother, Pearl Clark LaComa, who began performing with her father’s circus, the M.L. Clark and Son Combined Shows when she was only 4. Brackett lives in Augusta, Ga. with her husband, Bret. They have three children, Jessica, Jeremy and Allie and a 8 year-old rescued papillon named Danni. www.charmainzbrackett.com