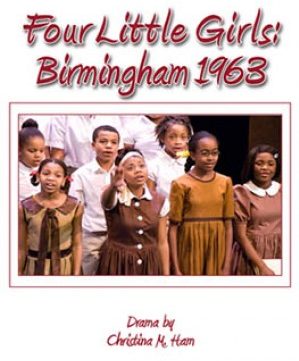 The play is based on the lives of four young girls killed in a church bombing during the Civil Rights struggle in the South. It presents the events of Birmingham through the eyes of Denise, Carole, Cynthia and Addie, four young girls with hopes and dreams for bright futures. Unfortunately, those dreams were never realized. The cast will consist of more than 20 parts to include male and female participants from aged 10 through adults. The play calls for African-American and Caucasian actors to recreate the world of Birmingham, Alabama, in 1963.

While the show is not a musical, there are roles for singers, using mostly religious music to enhance the story telling.

In addition to the four girls from the title, there are parts for middle and younger high school aged students, both boys and girls, as well as adults in the ensemble who help tell the story. The cast creates a cultural cross-section of the Southern city during the time of turmoil in a changing American landscape.

Audition Requirements:
Please prepare a contemporary monologue and/or cold reading from script. Project also requires some singing (be prepared to sing a gospel-style song of your choice or the hymn “Amazing Grace.”)

Download the script and learn more about these auditions online HERE!